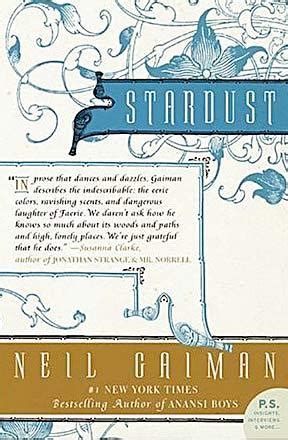 Stardust is a 1999 fantasy novel by British writer Neil Gaiman, usually published with illustrations by Charles Vess. Stardust has a different tone and style from most of Gaiman's prose fiction, being consciously written in the tradition of pre-Tolkien English fantasy, following in the footsteps of authors such as Lord Dunsany and Hope Mirrlees. It is concerned with the adventures of a young man from the village of Wall, which borders the magical land of Faerie. In 2007, a film based on the novel was released to generally positive reviews. Gaiman has also occasionally made references to writing a sequel, or at least another book concerning the village of Wall.The story begins in late April 1839, as John William Draper had just photographed the Moon and Charles Dickens was serialising Oliver Twist. The majority of the book takes place seventeen years later, starting around October 1856.